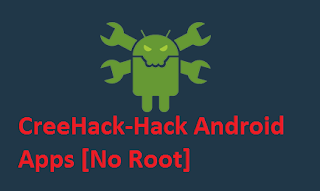 Just like the name suggests, In-App purchase is a feature in smartphones or mobile device to buy products and services within the app. The best example for this is Games, where a user can buy Gems, Coins and all sorts of virtual items needed from the game app itself by paying money. In this post, I will describe how some games and apps are affected by in-app purchase fraud and how to prevent it.


While it sounds very convenient to get the items from the app itself,  In-App purchases can be manipulated and goods can be obtained without actually paying anything. This is made possible by hijacking the purchase process and making the app believe that a purchase was successful, while in reality, it isn't. There are some apps readily available for this.

CreeHack is one such Android app, and it helps to bypass In-App purchases from google play store. Using this app, one will be able to purchase all Coins, Gems, Levels, Lives etc for free and also make trial version apps to full version.


All these apps contain an inbuilt free card, which can be used on Google Play. So whenever you attempt to buy something (Like gems, coins, life etc), creehack hijacks the process and completes the purchase with its inbuilt card. The actual request that was supposed to reach the server will get blocked at the device level by these apps. The result would be the user getting everything for free, without the need of spending any money.

Here you can see a demo of bypassing In-App purchases with CreeHack. It doesn't even require root access. Simply by installing the app and then opening the purchase tab of any app and tapping 'buy' would complete the purchase as shown in the screenshots. For a detailed tutorial and step by step instructions, refer this post.

Disclaimer/Warning: Hacking games/apps is strictly illegal and we do not promote it. Usage of such apps to obtain unfair advantage in apps might be harmful to your device and also punishable by law. I cannot be held responsible for what you do with suc apps. If you like the apps respect the developer and consider paying for apps. 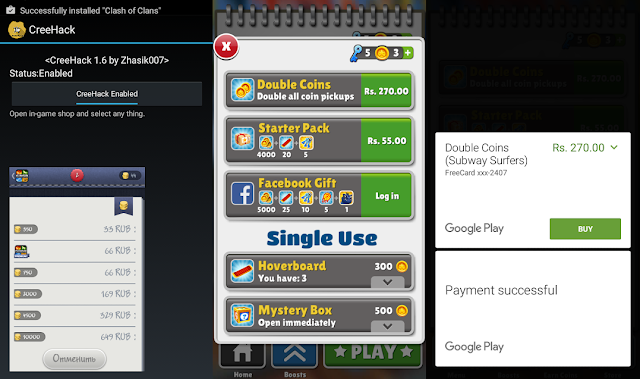 
There are several ways to fight In-App purchase fraud. Based on how these purchase manipulation works, below steps can be implemented. This also should explain why apps like CreeHack doesn't work on certain games/apps.

These are some of the way in which apps get hacked and possible solutions for it. However games/apps can be manipulated by altering the local storage too. So in order to fight these fraudulent changes, devs can implement periodic validation of purchases and make use of analytics to monitor and flag potential cases of abuse.