Mabouia: The first MAC OS X ransomware in the world. 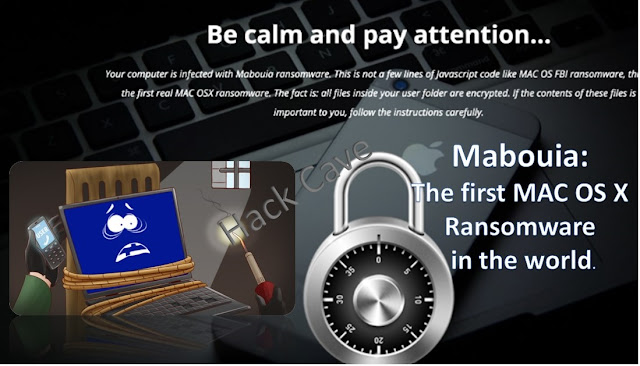 It is a myth that the Apple's MACs are safer and affected less by malware. On contrary, MAC OS is equally affected by viruses and malware attacks and there are several critical vulnerabilities discovered recently. However, ransomware targeting MAC OS was not previously known. Ransomware is a type of malicious software designed to block access to a computer system until a sum of money is paid.


Ransomware encrypts files stored on the machine, then displays a message informing the user that a decryption key must be purchased in order to recover access to the files held at ransom. A Brazilian Cybersecurity Researcher known as Rafael Salema Marques (@pegabizu), published yesterday a proof of concept about the existence of MAC OS ransomware. It is called Mabouia, the first ransomware that targets MAC OS X. This is a real and serious one, unlike the MAC OS FBI Ransomware which was just a few lines of javascript code and essentially a prank.


Mabouia Ransomware is coded in C++ and uses the Cryptographic Algorithm XTEA  with 32 rounds to encrypt the user files. Mabouia ransomware will only modify the user’s personal files hence it does not need superuser privileges for the execution of malicious code.Thus infection occurs with just one click.


According to the creator of Mabouia, Mac users are a good target for ransomware, because generally they have a higher purchasing power and use the computer in a superficial way. The researcher’s goal is to alert the 66 million users of Mac OS X about the dangers of such a ransomware.

How Mabouia Ransomware affects MAC OS X Can be watched live from the below link. (PoC)