Kali Linux NetHunter - Hack Like A Pro With Android Devices

What is Kali NetHunter?


To begin with, Kali NetHunter is the first Open Source Android penetration testing platform by Offensive Security and the community and it comes with an Android ROM overlay which together forms a powerful Mobile Penetration Testing suite. The overlay (one of two or more pieces of code that can be loaded to a per-determined memory region on demand at run-time.) includes a custom kernel, a Kali Linux Chroot, and an accompanying Android application, that provides smooth interaction with various pen-testing tools and attacks. It comes with all pen-testing tools available within Kali Linux. Basically, it converts your phone into an ultimate hack tool, using which you can hack WiFi or Facebook or literally anything. Apart from that NetHunter also has other interesting functionalities like HID Keyboard Attacks, BadUSB attacks, Evil AP MANA attacks, etc. 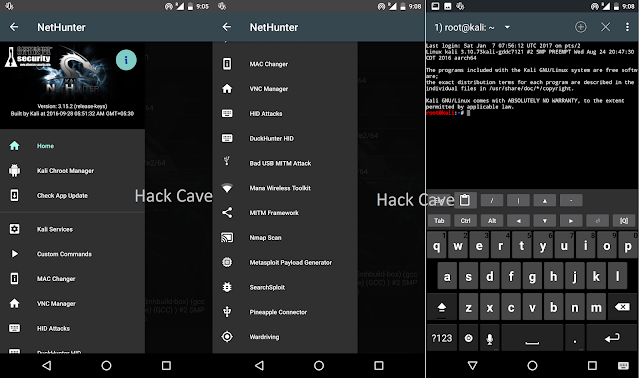 Following are some of the most popular features and attacks available in the Kali NetHunter application.


These can be installed as separate apps. Some of them comes pre installed.
For detailed documentation refer the Kali NetHunter GitHub page here.

This post is meant as an introduction to Kali NetHunter. Stay tuned for tutorials on installation, configuration and hacking tricks with Kali NetHunter.